“The boat and leisure home markets have continued to perform very well. The disruption affecting supply chains slowed our rate of growth during the first half of the year, with nearly €80m of billing deferred to the second half of the year, representing around 15% of the Boat division’s revenues. However, this will not affect our roadmap for profitability, which is continuing to benefit from the adaptation measures rolled out over the past two years and the realignment of our development around the Group’s profitable brands and segments as part of our Let’s Go Beyond strategic plan”, explains Bruno Thivoyon, Chief Executive Officer.

Boat division: robust trends supported by dayboating and the upturn in fleets.

During the first half of 2022, the Boat division generated revenues of €548.2m, with year-on-year growth of +2.8%, held back by the disruption affecting supply chains, which stabilized in the second quarter.

At June 30, 2022, around 600 finished boats were not able to be shipped and therefore billed, equivalent to the level from March 31, 2022. The deliveries of these boats that have been ordered will therefore be deferred to the second half of the year, with more than €80m of billing deferred, representing around 15% of the Boat division’s first-half revenues.

In Europe, revenues contracted by -7.7%, as a result of the disruption to supply chains, which affected large units in particular, as well as the rationalization of the brand portfolio (notably Monte Carlo Yachts and CNB Yachts, which were recording losses).

However, in North America, business was particularly strong (+15% at constant exchange rates), buoyed by the development of the dayboating segments, the turnaround by the American brands and the growth of the Beneteau, Jeanneau and Lagoon brands. In this region, the Group has also continued moving forward with its strategy to develop the Boat Club business, opening five new daily rental centers, particularly in Florida.

The first half of 2022 was also marked by a return to growth in fleet sales with charter professionals (+21.6%), which are seeing strong growth in their levels of weekly rental bookings for this season.

The Housing division achieved a record level of business during the first half of 2022, with revenues climbing +33% to €167m.

In France, sales increased by +34.4%, reflecting the strong upturn in activity levels for the leisure homes sector. In terms of exports, growth was driven primarily by the upturn on the Spanish and Italian markets, which continued to bounce back and accelerate during the first part of this year.

For the first half of 2022, the Group expects to achieve growth in income from ordinary operations, supported by a good level of margins despite inflation, as well as by the favorable change in exchange rate effects.

During the second half of 2022, the Boat division will benefit from an order book that is still very high, as well as the expected deferral of billing from the first to the second half of the year, and the significant increase in production capacity, with the ramping up of its catamaran production lines and the two Portuguese yards acquired at the end of 2021.

The Housing division will maintain a sustained level of business over the second half of 2022, with a still significant seasonality effect in the third quarter.

Groupe Beneteau is therefore able to confirm its full-year outlook for revenues, with 11% to 14% growth based on reported data, against a backdrop of the supply chain disruption stabilizing as observed in the second quarter, and is confirming its revised forecast for income from ordinary operations of €110m to €120m, significantly higher than 2021 (€95.8m).

Groupe Beneteau will report its: 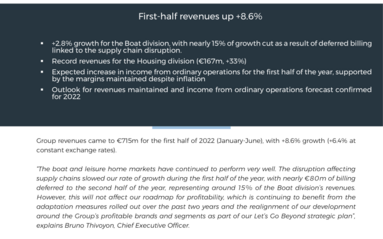 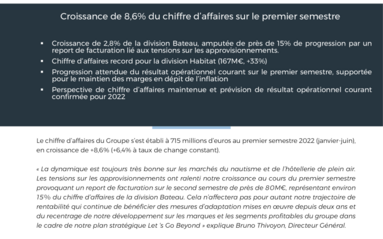