First-quarter business and outlook for 2022

Groupe Beneteau recorded strong demand across both of its markets, with 2022 first-quarter revenues of €317m, up 10.6% based on reported data (+8.9% at constant exchange rates).

The Boat Division’s revenues climbed +7.5%, with stronger growth for motorboats and the dayboating segment in particular. This trend was very strong in North America, where growth reached 19.9% at constant exchange rates, as well as the Rest of the World region (+61%). Alongside this, fleet sales began picking up again (+2.8%).

In the premium dayboating segment, the new JEANNEAU DB/43 received a particularly enthusiastic response during its world premiere on the Côte d’Azur in France at the end of March. On the Real Estate on the Water market, PRESTIGE launched the M48, its first power catamaran from the M-Line range, while the first electric DELPHIA D11 models received a very positive response when they were unveiled on the canals in the Netherlands.

In the monohull sailing segment, BENETEAU unveiled the new First 36, a series-production boat with full-cruising capabilities and competitive pricing. At the International Multihull Show in La Grande-Motte, the LAGOON 51 received a very favorable response for its world premiere.

In the Housing Division, the Sainte-Hermine plant started up on January 3, before ramping up its operations as forecast, making it possible to achieve outstanding growth from the first quarter. Revenues are up 21.4% to €78.5m, benefiting from the robust development of the market in France (+30.3%) and other European countries.

While marked by the quality of the orders received and the commercial success achieved by the products, 2022 has also seen supply chain disruption, which has held back growth. All of the Group’s plants and teams are continuing to respond to this situation and adapt.

The Combined General Shareholders’ Meeting will be held on June 17, 2022.

Groupe Beneteau will report its: Jérôme de Metz is Chairman and CEO of Groupe Beneteau since June 2019.

Graduated of SKEMA Business School and a chartered accountant, he started in the auditing industry...

Groupe Beneteau
Board of Directors
Management Board
Read more Bruno Tivoyon is Deputy CEO in charge of Finance, Legal and IT Systems since January 1, 2022. He joined Groupe Beneteau in January 2020 as Group Chief Financial Officer. 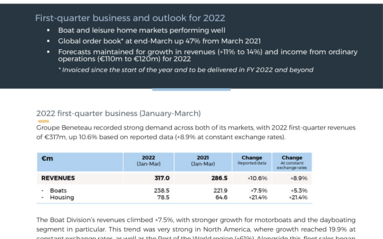 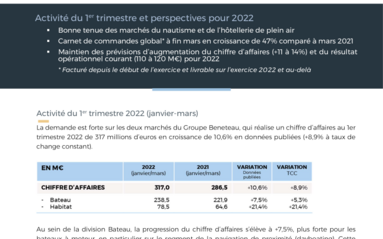 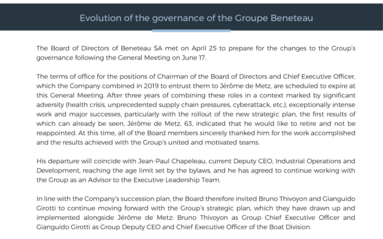 220425 BENETEAU Evolution of the governance 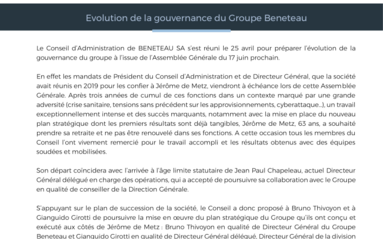 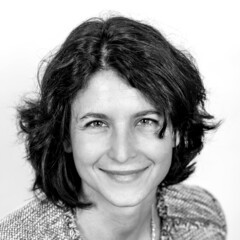