Groupe Beneteau presents the actions rolled out worldwide to scale back its production capacity and its costs.

The “Let’s Go Beyond!” strategic plan presented on July 9, 2020 is the result of an approach on two levels: strong strategic choices and the requirement, faced with the consequences of the health crisis, to move more quickly and go further with their implementation.

The first period of this plan is therefore moving forward in a significantly disrupted and contrasting economic environment: the sailing and inboard motorboat segments could see a similar contraction in volumes to the 2008-2009 crisis, which would not be offset by dayboating market growth.

In this context, the Group needs to significantly scale back its production capacity over the coming months, while simplifying its organization and reducing all of its fixed costs.

For the Boat division’s 16 active molding and assembly sites (10 in France), the Group is considering the following measures:

For the Boat division globally, these measures would lead to job cuts for staff assigned directly to production, resulting in a reduction in the workforce by 300 to 840 people. In France, the density of the Boat division’s industrial coverage would make it possible to avoid any redundancies for production operators if all of the staff concerned accept the internal mobility measures that will be proposed to them.

With regard to indirect production, product development and support services staff, the cuts being considered would result in a reduction in the workforce by 380 to 460 people for the whole of this division.

For the Housing division’s eight sites (seven sites in France and one in Italy), the following measures are being considered:

From an employment perspective, the global workforce reduction being considered would see this division’s headcount reduced by 30 to 90 people, depending on the level of acceptance of the internal redeployment offers that will be made.

Groupe Beneteau is holding a meeting of its Group Committee today, followed by each of the Economic and Social Committees (CSE) for the French legal entities concerned, in order to inform them of the start of negotiations for a long-term partial activity agreement (APLD) alongside an information-consultation procedure with a view to putting in place job protection plans.

Overall, across the Group, these measures would result in five out of 24 sites being closed, sold or temporarily shut down and a reduction in the workforce by between 710 and 1,390 people (if the long-term partial activity agreement (APLD) is approved in France) out of the 8,361 staff present in the Group at August 31, 2019.

In addition, Groupe Beneteau would like to indicate again that the Extraordinary General Meeting on August 28, 2020 approved the change of its financial year-end date, which has been put back to December 31 of each year. The next accounts published will therefore be for the year ending December 31, 2020.

Further financial elements will be published on October 27, 2020, including information on the end of the summer season for the Group.

The Group is already able to confirm that business for the period from September 1, 2019 to August 31, 2020, and particularly the last quarter, came in slightly better than the forecast announced on July 9, 2020. The same is true for the net cash position at August 31, 2020. 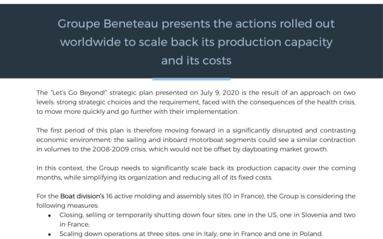 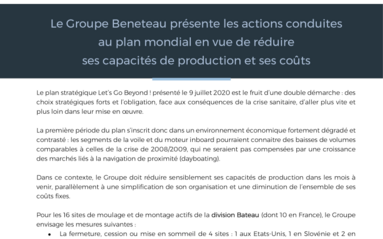